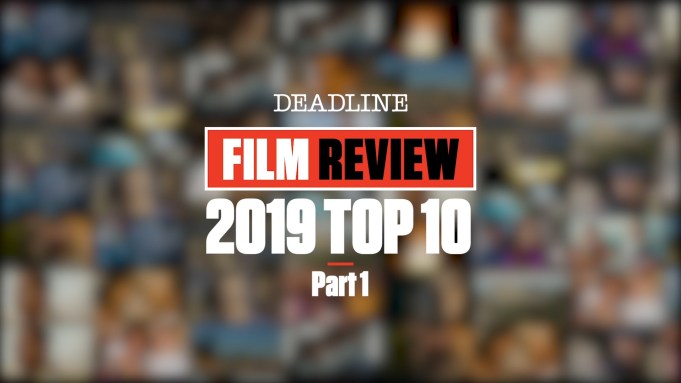 It’s that time again, the end of the year when it seems everyone has a list. It is no different in my case and so once again I present — in two parts, today and Thursday — my ranking of 2019’s 10 best films. Actually make that 11 best films, since I couldn’t resist a tie as you will see when you watch today’s installment covering Nos. 6-10. Click on the video to see them.

It is always hard putting one of these compilations together, and of course it is all arbitrary in many ways. I was happy to see last year that Oscar and I agreed on our No. 1 choice of 2018, Green Book, but there are so many worthy films in so many different ways that it becomes almost like a Solomon’s Choice situation to separate them. Nevertheless, I have my reasons for inclusion of the films on this list, and I hope that if you haven’t seen them that this might give you an extra nudge to check them out.

In Part I, I present my choices beginning at No. 10, a small independent film that moved me so unexpectedly when I saw it last June in so many ways that I just can’t begin to describe. It is a film that I still can’t get out of my head, reason enough to include it even if it weren’t exceptionally well acted, written and directed — as well as presenting an unforgettable look at one of America’s great cities.

At No. 9 is where I called a tie, because both of these films from Fox Searchlight use wildly opposing methods to show resistance to Nazi Germany in World War II in such effective ways I just decided to combine them. One represents a major comeback to glory for a celebrated director who I felt I had lost his way with his last few movies. This is a return to greatness and a film that has great relevance to the dark times in which we again find ourselves living. It is extraordinary. The other movie uses comedy in daring ways to remind us of the foibles of that time and leaders who take us down the wrong paths and bring out the worst in humanity. It comes from a startlingly original director who represents one of the most creative voices working in films today, one who uses an unusual approach and has the ability to reach the hearts and minds of people, especially younger ones not alive at the time, in order to make sure we never forget.

At No. 8 is another richly human film that represents a very personal story for its director, who happens to be a woman telling her own story of family. It comes in a year of exceptional films from women including such gems as Greta Gerwig’s new take on Little Women, and Marielle Heller’s wonderfully rich A Beautiful Day in the Neighborhood to name just two others. It also provides a sterling leading role for one of today’s emerging comedy stars in her first dramatic role, and it all just might make you think about your own familial relationships when you discover how universal it really is — even if it takes place on the other side of the world.

At No. 7 comes a comic book film like no other, a dip into Hollywood’s favorite kind of tentpoles that dares to go dark and deep into what ails us as a society and manages to transcend its genre to present something completely fresh and very disturbing. It also happens to feature a leading performance that is one for the ages.

Finally for today, at No. 6 comes a true love story wrapped around the most unusual of subject matter. We rarely get to see a movie dealing with these kinds of issues between a man and a woman, a husband and a wife, a father and a mother, in such funny, heartbreaking and simply human ways. Its director and writer keeps managing to make movies that make us look at ourselves, and in this case has managed to top himself with a film that also happens to have a sensational cast working at the top of their game.

I hope this is enough to whet you appetite. In the meantime, Happy New Year and come back Thursday for my Top 5 including my favorite movie of 2019.