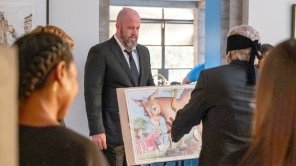 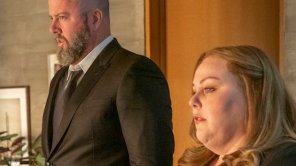 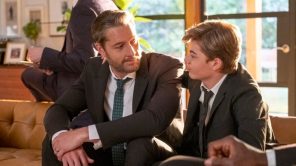 The end is near for NBC’s celebrated family drama This Is Us, and NBC has released first-look images for the May 24 series finale, “Us.”

In it, The Big Three and their families are seen wearing black as they gather for Rebecca’s funeral. There are photos of Randall and Kate eulogizing their mom, Kevin is seen having a nice interaction with uncle Nicky, Randall is sharing a moment with Deja, who is expecting his first grandchild, there is a final KaToby pic, and The Big Three spend some time together sitting on the steps of the family cabin.

There is clearly a Pin the Tail on the Donkey story thread that links the past and the future, with photos of the mourners playing the game on the day of Rebecca’s funeral and young Rebecca holding the book when The Big Three are toddlers. (Rebecca mentioned the game in her memorable “I’m not worried about forgetting about the big stuff. It’s the little things I’m not ready to let go of yet” speech early in the season.)

In an interview at Deadline’s Awardsline screening of This Is Us‘ penultimate episode “The Train” earlier this week, This Is Us creator Dan Fogelman teased the finale, which he wrote.

“In the last episode, we will try to capture something simple which, while sad, is kind of a day in the life, which is so much of what the show is about, set against Rebecca’s funeral,” he said.

The show intentionally resolved all major mysteries ahead of time “so people can sit with the family in the final episode in the simplest of way,” Fogelman said. “While it will make you cry, it will make you sad, the end of the finale moves me in a way that is different. I think the cast and crew captured something about the human condition and the condition of being a person in the family that I am really proud of.”

He also jokingly teased another death and shared a line from the finale, “I wish I’d enjoyed it more while it was still happening instead of worrying when it will end,” revealing which character says it.

You can watch the video again below. To launch the photo gallery, click on the image above.