'This Is Us': How NBC Drama Wrapped The Pearsons' Story After Six Seasons; Dan Fogelman Breaks Down Series Finale; Stars React To End
Read the full story
April 25, 2021 4:00pm
61 View All 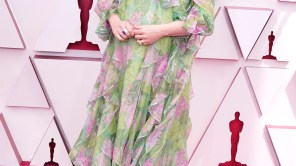 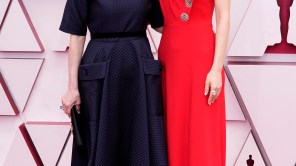 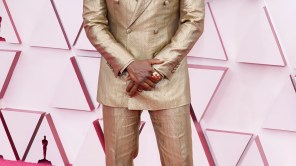 Another virtual ceremony, another missing red carpet? Not for the Oscars. Just as the Academy somewhat controversially brought the nominees to the show in real life, rather than attempting the fully virtual shows we’ve seen for Emmy, Golden Globe and SAG awards, the Oscars kicked off in style Sunday with a real red carpet. Usually the pinnacle red carpet show of the year, the Oscars tried its best to bring some pre-pandemic level glamour to tonight’s awards at Los Angeles’ Union Station.

Oscar-winner Halle Berry and Promising Young Woman producer Margot Robbie debuted new hairstyles for the occasion. Berry teased her short bob by posting a photo of a pile of hair on Instagram earlier in the evening.

Nominees Carey Mulligan — Best Actress, Promising Young Woman — and Daniel Kaluuya — Best Supporting Actor, Judas and the Black Messiah — put their own twists on classic looks. Mulligan was elegant in a strapless gold Valentino Haute Couture gown with a bandeau top. Kaluuya rocked a black-on-black Bottega Venetta suit with a black t-shirt. He put some shine on the look with a Cartier diamond necklace, watch and pinky ring.

Promising Young Woman writer and director Emerald Fennell wore a diaphanous pastel floral sequined gown. Fennell likes to come up with character descriptions for her carpet looks and told E!’s Giuliana Rancic during the Oscars pre-show, “Tonight I am Susan, your pottery teacher who has a business opportunity for you which is absolutely not a pyramid scheme.”

Diane Warren looked chic in a Valentino sequined turtleneck with white suit with matching boots. “It helps to know [singer] Laura Pausini,” Warren told Rancic. “I’ve never been dressed by a designer before.” Also in a white suit like Warren was Tiara Thomas, who like Warren is up for best Original Song. And white seemed to be the color of the day, since supporting actress nominee Maria Bakalova chose a custom-made Louis Vuitton white gown, which contained an incredible 100 meters of tulle in the skirt.

There were some show-stopping suits among the men too, besides Daniel Kaluuya’s elegant Bottega Veneta look; Colman Domingo in an intense bright pink suit, with crystals embellishing the jacket; and One Night in Miami‘s Leslie Odom Jr in a gold suit with matching shirt and tie. Then came Sound of Metal supporting actor nominee Paul Raci in a black-on-black suit with embellished collar and pin and black nail polish to match.

Hillbilly Elegy‘s Glenn Close, with her eighth nomination this year, wore an Armani Privé beaded electric blue gown over French navy silk pants with purple leather gloves, which the designer included as an homage to his mother who always wore gloves. “I feel great,” Close told Rancic. “My shoes are comfortable, [the carpet] is not two miles long which is lovely.”

Click on the photo above to launch our gallery of the evening’s looks, and check back as we keep updating.