Continue to Deadline SKIP AD
You will be redirected back to your article in seconds
Skip to main content
February 28, 2021 4:19pm
29 View All 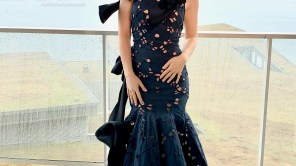 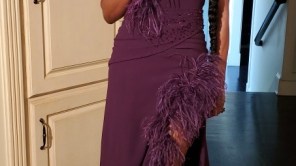 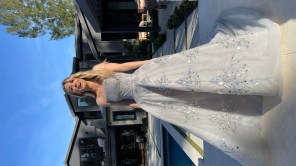 The Golden Globes could have been less glitz and glamour and more pajama party, given the stay-at-home Covid-19 factor this year. But in the spirit of keeping on, nominees leaned into the awards show spirit Sunday and dressed up for their video conference moments.

Among the glammed-up stars are Angela Bassett in a deep purple Dolce & Gabbana gown; Josh O’Connor of The Crown in a look by LOEWE—a modern twist on a tux with a white silk scarf instead of a tie; and Sarah Hyland, wearing an off-shoulder Monique Lhuillier gown in scarlet, with Jimmy Choo shoes and Lorraine Schwartz jewels.

“I’m dressed up for the first time in a very long time,” she told E!’s guest co-host Karamo Brown.

Joining the virtual red carpet from London, where she’s shooting Season 2 of Hulu’s comedy series The Great, nominee Elle Fanning was in a custom Gucci mint green 1930s-style gown, with her hair pulled back to display long chandelier earrings by Fred Leighton. “To put on a dress to walk from my living room to my kitchen—it’s nice,” Fanning told E! host Giuliana Rancic.

Check out the gallery of the evening’s looks, and check back as we keep updating.