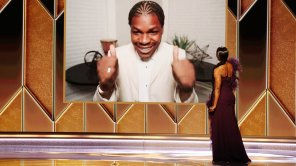 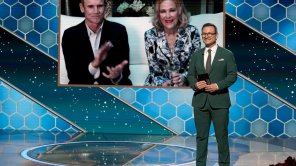 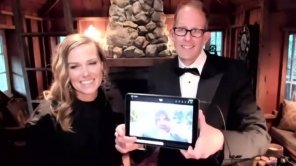 Mark Ruffalo got one award for two roles at the Golden Globes on Sunday, winning Best Performance by an Actor in a Limited Series, Anthology Series or a Motion Picture Made For Television for HBO’s I Know This Much Is True.

In True, Ruffalo plays identical twin brothers Dominick and Thomas Birdsey, the latter of whom suffers from paranoid schizophrenia and the former of whom fights to free his brother from a hospital for the mentally ill.

Ruffalo accepted the award with his wife at his side and kids happily jumping behind him. He thanked them first for putting up with his time away on set and also for the work he brings home with him.

“Thank my family who lets me go off and bring all these crazy people home they have to live with all of these years. Thank you guys.”

Ruffalo also read a long political statement about inclusion, justice and “care for Mother Earth,” ending with, “we are the ones we’ve been waiting for, so let’s do this now. I love you.”

It’s the actor’s fourth Globe nomination in the past six years and his first win.