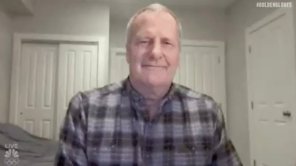 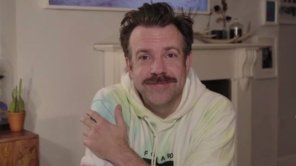 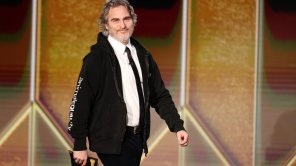 With the Golden Globes ceremony going virtual, the dress code was far from formal for several nominees who opted for a rather casual look.

Social media was abuzz Sunday night over the Hawaiian shirt sported by Bill Murray, nominated for his role in On the Rocks, who completed the tropical vibe with a martini in his hand and sunshine and greenery behind him.

Jeff Daniels, a nominee for The Comey Rule, also became an instant social media darling for wearing a plaid, flannel shirt in a plain room that got its own Twitter recognition for its many, many doors.

Ted Lasso‘s Jason Sudeikis, nominee and winner for Actor In a Comedy Series and nominee for Comedy Series, turned heads with his tie-dye hoodie.

He later explained that he chose the garment to show “family pride.”

“I believe, when people that you care about do cool, interesting things that you should support them,” he said. “So, this is no different than that. I have a multitude of hoodies, I could have worn for a multitude of things I believe in and support. You know, this one seemed the most appropriate.”

Golden Globes presenter Joaquin Phoenix carried the hoodie fashion trend over to the Beverly Hills Hotel, donning one while taking the stage in Los Angeles.

Another presenter, Sandra Oh, opted for a parka as she introduced the film of her 2019 Golden Globes co-host Andy Samberg, Palm Springs, complete with a sledding dinosaur.

Also a prop you would not see at an in-person Golden Globes ceremony, Nomadland director Chloe Zhao raising a green ceramic mug to celebrate.

Fellow winner Jodie Foster (The Mauritanian) and her wife both wore fancy pajamas.

Zooming from home, some nominees got creative with their background.

Jared Leto (and his flamboyant oversized boutonniere) chose to sit in front of his white “straight from IKEA” shelves.

Meanwhile, Ratched‘s Cynthia Nixon had a cutout of Bernie Sanders in his mittens from the Inauguration behind her and her family.

Nixon was one of many nominees to attend the virtual ceremony with their kids who often stole the show. That includes Minari filmmaker Lee Isaac Chung‘s adorable little daughter and Mark Ruffalo‘s children who could not contain their excitement when their dad won. Other famous actors posing with their young children included The Undoing‘s Nicole Kidman, Ozark’s Jason Bateman and Music’s Kate Hudson, who had assembled a large family group.

Pets were not as well represented on the show though Regina King’s dog stole the spotlight in her pre-show interview. Carrying the flag for cute furry companions during the ceremony was Foster‘s dog wearing a bow that matched Foster’s outfit.

Click on the image above to launch the gallery of the most memorable at-home images from the Golden Globes.