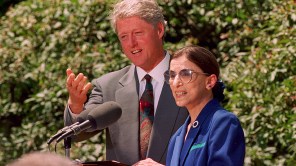 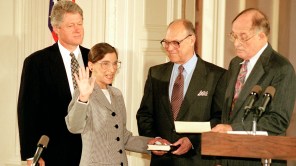 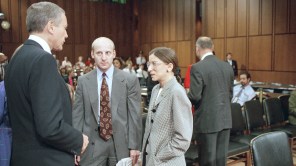 America lost a pioneering champion for human rights today when Supreme Court Justice Ruth Bader Ginsburg died at 87. Click on the image above to see a photo gallery on her incomparable career.

Ginsburg was the first nominee to the high court by President Bill Clinton, who was less than five months into his first term at the time. Succeeding the retired Byron White, she was the second woman to serve on the Supreme Court, after Sandra Day O’Connor broke the gender barrier in 1981.

In more recent years, the Brooklyn-born Ginsburg became a celebrity in entertainment industry circled, earning the nickname “Notorious RBG.” She was a subject of an Oscar-nominated 2018 documentary titled RBG, and her struggles for equal rights were chronicled in Mimi Leder’s 2018 feature On the Basis of Sex, in which Ginsburg was played by Felicity Jones.

As an attorney, Ginsburg was director of the Women’s Rights Project of the American Civil Liberties Union in the 1970s and brought a series of cases that made it to the Supreme Court, challenging sex discrimination in federal laws.

Check out the photos above.

‘RBG’ Directors On How Ruth Bader Ginsburg Wanted To Be Remembered