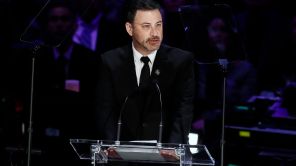 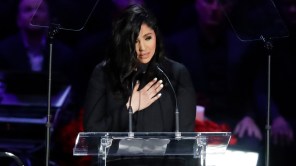 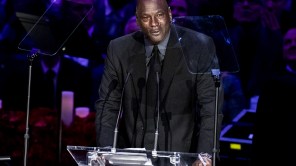 UPDATED with speech videos, photo gallery: Beyoncé opened the Celebration of Life for Kobe and Gianna Bryant’s memorial service Monday at Staples Center by singing “XO,” complete with a chorus and multi-piece orchestra for a song she said was Kobe Bryant’s favorite. It kicked off an event heavy on emotion and themes of loss, love and female empowerment embodied in Bryant’s father-daughter relationship, which his longtime friend, agent and Lakers general manager Rob Pelinka said in his eulogy made Bryant “the world’s greatest girl dad.”

Performances also came separately from Alicia Keys and Christina Aguilera, and the several speakers included Jimmy Kimmel, who emceed the two-hour plus event; and Michael Jordan, Bryant’s childhood hero. (Click on the top photo to launch a gallery from the day.)

Also delivering a eulogy was Bryant’s Lakers teammate Shaquille O’Neal, with whom he won three consecutive NBA titles as teammates despite often being each other’s biggest rival.

“In truth, Kobe and I always maintained a deep respect and love for each other,” O’Neal said.

Highlighting Bryant’s legendary competitive nature, O’Neal during his remarks recalled his Lakers teammates once complaining to O’Neal about Bryant not passing the ball enough.

Beyoncé’s opening song was followed by longtime Lakers fan Kimmel who introduced a shaky but strong Vanessa Bryant, who talked about her “baby girl” Gianna and her husband, “my everything.” She sat in the front row alongside her other daughters for the event.

Later, Keys played a version of Beethoven’s “Moonlight Sonata” in reference to a story in Pelinka’s eulogy where he recalled Bryant teaching himself the song, one of his and Vanessa’s favorites, on piano to play for her. (Keys helped tribute Bryant as host of the Grammy Awards, which were held at Staples Center the night of the tragic crash.)

Vanessa Bryant dabbed away tears during the performance.

NBA legend Jordan, Bryant’s basketball idol, also was in the crowd and later spoke through tears.

Vanessa Bryant nearly broke down after she was announced to the stage, which was set up as a theater-in-the-round style in the center of the arena. She recovered after encouraging applause from the crowd, reading a tribute to Gigi, who was 13.

“I miss her so much,” she said, adding that “she would have been the best player in the WNBA…she would have changed women’s basketball.”

“Now my soulmate,” she later said of Kobe Bryant. “He was my sweet husband…he was mine — he was my everything.”

In her final comments in a speech that held the crowd rapt in attention, she said: “God knew they couldn’t be on this Earth without each other. He had to bring them home to have them together. Babe, you take care of our Gigi, and I’ll take care of Nani, Bibi and Coco — we’re still the best team. We love and miss you Boo Boo and Gigi, may you both rest in peace and have fun in Heaven until we meet again one day. We love you forever and miss you always. Mommy.”

Beyoncé was introduced as “a close friend of the Bryant family.” “I’m here because I love Kobe, and this was one of his favorite songs,” she said to the crowd, which had been lining up since pre-dawn outside Staples Center to honor Bryant, his daughter and seven others who were killed in the helicopter crash January 26.

Kimmel followed Beyoncé, his voice noticeably shaky during his eulogy of sorts, saying “you picked the wrong guy to guide you through this, I’ll tell you,” as he read off the names off all nine victims of the crash that occurred in the morning hours last month.

“I’ve been trying to come up with something positive to take away from this — it was hard because it isn’t much — the best I can come up with is this: ‘gratitude.’ It seems to me all we can do is be grateful for the time we had with them and the time we have left with each other,” he said.

Other speakers included WNBA and Olympics icon Diana Taurasi; college star Sabrina Ionescu, who plays for the University of Oregon and became close with the Bryant family; and Geno Auriemma, the Hall of Fame coach of the University of Connecticut’s women’s college basketball team, who said Vanessa Bryant asked him to speak. All highlighted Bryant’s relationship with Gigi, a budding basketball player who was following her father’s path.

“If you’re a father, a grandfather, you feel a different kind of emotion when there are children involved,” Auriemma said, referencing the crash. “Because this is always about the children.” He later talked about his conversations with Bryant about coaching, before Bryant first began coaching Gigi.

The itinerary for the event has been under wraps, with no program handed out to the 20,000-plus attendees in the arena where Bryant played for the Los Angeles Lakers. Proceeds of tickets sold today go to Bryant’s Mamba and Mambacita sports foundations, and the MambaOnThree fund.

The ceremony ended with Bryant’s final speech playing on the Staples Center jumbotron, when his Lakers numbers were retired (“Mamba out,” he memorably said, dropping the mic). Aguilera then took the stage to wrap things singing “Ave Maria.”

The event concluded with the showing of Bryant’s Oscar-winning short film Dear Basketball.

“This season is all I have left to give,” he says in his ode the sport he ruled. “My heart can take the pounding, my mind can handle the grind, but my body knows it’s time to say goodbye. And that’s OK — I’m ready to let you go. I want you to know now, so we both can savor every moment we have left together, thee good and the bad, we have given each other all that we have. … Love you always, Kobe.”