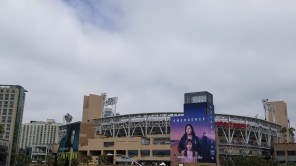 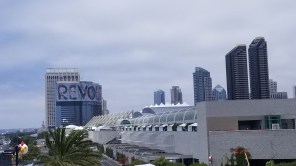 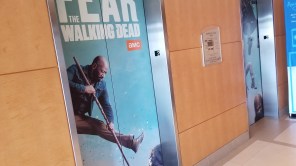 The film studios may be taking a back seat this year inside the San Diego Convention Center at Comic-Con, but the always vigorous battle for skyscraper space, square footage and activation attractions in San Diego is no less full throttle.

In a typically crowed skyline, the clear winner this week is Fox Animation, with its prominent wrap on a downtown hotel right across from the convention center, signage on the transit trolleys, and the debut of self-described 24,000-square-foot Fan Park that includes a 70-foot-tall Ferris wheel. Staying strictly on brand and clearly at no small cost, athe marketing gives shout-outs to the now-evolving network’s Sunday slate of vanguard The Simpsons, Bob’s Burgers, Seth MacFarlane’s Family Guy and the upcoming Bless the Harts.

Click on the photo above to launch a gallery showcasing this year’s Comic-Con marketing blitz in San Diego.

If Fox attacked the 50th annual San Diego Comic-Con branding war on multiple fronts, Amazon Prime Video has landed the mother ship. Escalating its presence in the past few years, the Jeff Bezos-owned streamer has gone larger than anyone else this time round with a 60,000-square-foot activation.

Linking together the upcoming sordid supes saga of The Boys, the fourth season of The Expanse, the Orlando Bloom- and Cara Delevingne-starring Carnival Row and the final season of The Man in the High Castle, the slightly tucked away and well-walled immersive Amazon effort sports a 40-foot tower with a giant video screen on top highlighting all the series. If the off-the-beaten-track geography of downtown’s MLK and 1st seems just a bit too far, Amazon have partnered with Lyft on scooters to get attendees to the site and around the city.

All of the Amazon shows have panels over the next few days, and a huge Carnival Row poster is also featured on the parking garage next to the Hilton Bayfront and the well-traveled pedestrian sky bridge. As for The Boys, the so-called heroes of the gritty show based on Garth Ennis and Darick Robertson’s comic also has a hotel front street-art-themed display in the Gaslamp.

As in past years, NBC is set up in front of the Hard Rock Hotel, and ABC has taken over the back end of the San Diego Padres’ massive Petco Park with banners for newbies Stumptown and Emergence. Also back in the same space, FX looms off the Hilton Bayfront, now with the upcoming Alex Garland high-tech series Devs. The now-Disney-owned cabler is also again putting together an immersive park in front of the hotel with offerings from American Horror Story and others.

As in previous confabs in California’s second largest city, there’s a zombie apocalypse activation from The Walking Dead just across the tracks from the convention center with big crowds expected later this weekend. About to enter its 10th season, the AMC series again has the coveted space on everyone’s passes. Pivoting towards the hype of the Instagram nation, TWD is urging fans to show up in apocalyptic outfits Saturday in Petco Park to be featured in a giant photo to be used in later promotions.

There are also new additions to the SDCC landscape this year.

In a move of brazen introduction, CBS All Access has made sure everyone of the over 150,000 attendees to this year’s Con know that Star Trek: Picard is in town and coming soon. The hotel wrap for the Patrick Stewart-led return of the Next Generation leader is perfectly situated on the downtown Hilton to be in the eye line of anyone walking along the front of the Convention Center. Deeper in the Gaslamp district, Star Trek: Discovery and Jordan Peele’s Twilight Zone revival both have hotel wraps.

Having previewed last night before a packed room, the CW’s Batwoman has taken a distinctly street level approach to getting the word out with a train track banner right near the convention center and on bus stops throughout the City in Motion.

There is no Watchman panel at SDCC this year, but the Damon Lindelof-propelled series based on elements of Alan Moore and Dave Gibbon’s iconic comic is capturing a lot of attention. HBO has a highly hyped Doctor Manhattan activation on the Petco Park grounds and posters up all over the Gaslamp.

With Watchmen looking to premiere later this year, the guerilla marketing moves in the real world and on social media will lead to the dropping of a new trailer of the series led by Regina King, Jeremy Irons and Don Johnson this weekend.

Welcome to the wars.