Continue to Deadline SKIP AD
You will be redirected back to your article in seconds
Skip to main content
June 24, 2019 12:23pm 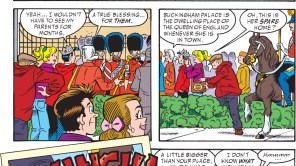 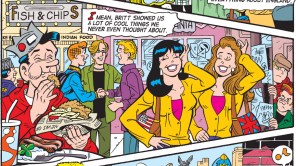 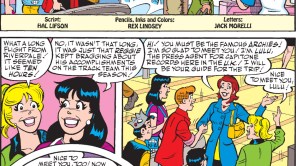 That’s the plot of “Name Fame,” a five-page story in Archie Jumbo Comics Digest issue no. 302 that playfully reacts to the royal newborn who shares both the first name and the hair color of the Archie Andrews character. The issue won’t hit shelves until September but below you can see an exclusive first look at the cover by artist Jeff Shultz with colors by Rosario “Tito” Peña.

Archie Harrison Mountbatten-Windsor was born on May 7 and his name was revealed two days later by his parents, the Duke and Duchess of Sussex. That set off a tidal wave of social media squeals and memes from fans of the CW’s frothy teen drama Riverdale and its star, KJ Apa, who portrays Archie.

Riverdale showrunner Roberto Aguirre-Sacasa was among the many votes hailing the Earl of Riverdale: “Best. Crossover. Ever. #Riverdale goes ROYAL. Congrats to the Meghan and Harry #archie!” That hit series (which just finished its third season) is an adaptation of the strait-laced teenybopper introduced in Archie Comics back in 1941.

The upcoming Archie Comics issue will likely be a strong seller and it follows a long tradition of topical and timely stories involving Archie, Betty, Veronica, Jughead, and their pals, according to Jon Goldwater, the Publisher/CEO of Archie Comics.

“Archie has a long history of being part of the world conversation, and this is the latest – and maybe the greatest – example of that,” Goldwater said . “When we learned that the royal baby was named Archie, we knew we had to engage with this bit of history in an organic and fun way. And what’s better than showing how Archie himself reacts to the news?”

Goldwater added: “This story is a fun, light romp that features all the classic elements of Riverdale – with a royal twist!”

The “Name Fame” story originated from Archie Comics Co-President/Editor-in-Chief Victor Gorelick, with a script by Angelo DeCesare and interior art by Jeff Shultz. The 192-page digest ($6.99) hits comics shops and digital platforms on Sept. 4,  and reaches newsstands on Sept. 10.

Archie was created in 1941 by writer Vic Bloom, artist Bob Montana, and publisher John L. Goldwater, the father of the current CEO.

Since the start, Archie Comics have revolved around a group of all-American kids but the Riverdale gang have made it across the pond a few times, too. Click on the art image above to peruse a gallery of Archie Comics covers and images that visit London or feature famous British exports, such as Harry Potter or the Beatles.