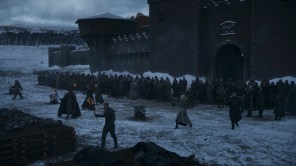 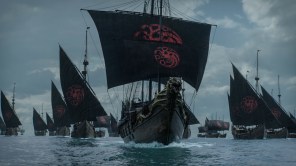 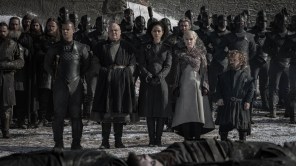 Now that the dust from the Battle of Winterfell has settled, where does Game of Thrones plan to go next? Well, from the looks of photos from the next episode, everyone seems to be mourning the casualties and Cersei (Lena Headey) is patiently waiting for the war to come to her with a face that says, “Bring it on.” Meanwhile, Daenerys (Emilia Clarke) has a look on her face that says, “It’s already been broughten!”

Based on the photos released by HBO today, the fourth episode of the eighth and final season have many mourning the deaths from the Battle of Winterfell — mainly from the Stark siblings (Sophie Turner, Maisie Williams, Isaac Hempstead Wright), Jon Snow (Kit Harington) and Tyrion (Peter Dinklage). Meanwhile, Cersei and Dany seem like they are pretty satisfied with themselves and are ready to throw down.

Last week was an all-out war as the Night King brought fury upon Winterfell. The body count was high, claiming the lives of Dolorous Edd (Ben Crompton), Beric (Richard Dormer), Melisandre (Carice van Houten) Jorah (Iain Glen) and fan favorite Lyanna (Bella Ramsey). With only three episodes left until we say goodbye to GoT, Sunday’s episode will address the aftermath and from the look of these photos, it is clear that the war is far from over.