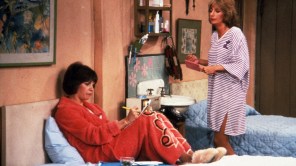 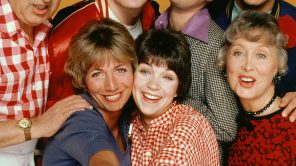 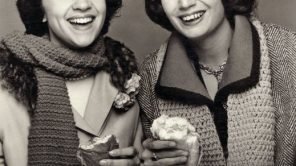 The actress and filmmaker who went from recurring on The Odd Couple to starring in one of the biggest sitcoms of the 1970s to producing and/or directing studio features including Big and A League of Their Own has left us. Penny Marshall died Monday night at her Hollywood Hills home at 75, leaving behind a legacy of revered and respected work in front of and behind the camera. Click on the image above to launch a photo gallery of her career.

Marshall played Laverne DeFazio for eight seasons on ABC’s Laverne & Shirley, teaming with Cindy Williams for the tale of roommates who also worked together at the Milwaukee brewery in the 1950s (and later the ’60s). Joined by their screwball, put-upon neighbors and co-workers Lenny and Squiggy (Michael McKean and David L. Lander), Laverne and Shirley navigated the single, blue-collar Midwestern life for 175-plus episodes.

Marshall, who was married to Rob Reiner for 10 years, continued to work as an actor until just a couple of years ago but developed a second career as a pioneering filmmaker. Her movies featured such stars as Tom Hanks — who led Big, which became the first movie directed by woman to hit $100 million —  Denzel Washington, Robert De Niro, Robin Williams, Whoopi Goldberg, Drew Barrymore, Danny DeVito, Geena Davis, Elizabeth Perkins, Madonna and Whitney Houston.

Click through the gallery to remember some of Marshall’s career highlights and some personal moments.