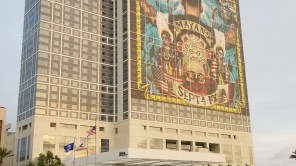 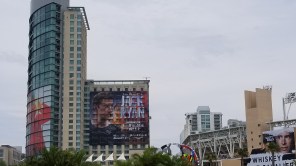 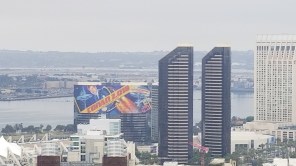 Comic-Con panels don’t start until Thursday and they are still unpacking the last of the hardware and memorabilia in the exhibit halls at the San Diego Convention Center. But out on the city’s streets, the battle for eyeballs is already going strong, with FX’s upcoming Mayans M.C., The Walking Dead, Amazon’s Jack Ryan and a deep-bench Marvel positioned to capture the most marketing attention on the jam-packed skyline of the City in Motion.

(Click on the photo above to launch our gallery of posters, installations and more going up in San Diego.)

For sheer size and location, Sons of Anarchy creator Kurt Sutter and FX’s September 4-debuting Latino biker series looks to have the edge with a takeover of the front of the Hilton Bayfront, right next to the convention center. Inescapable to anyone down near the action, the Mayans display also looms over a lawn set up for series co-created by Elgin James and an FXhibition of activations for the network’s Archer, American Horror Story and Legion. Last year it was the Noah Hawley-run Marvel series Legion that had the prime spot on the side of the hotel.

Speaking of Marvel, while the Disney-owned studio seemingly isn’t blowing off any hats this year with a multi-movie Hall H presentation, the home of Iron Man, the Black Widow, Captain America and Black Panther is taking a SDCC victory lap. Celebrating “The First Ten Years” of big-screen dominance and multibillion-dollar box office that began with the Robert Downey-starring Iron Man in 2008, several Marvel characters grace the official Comic-Con banner that appear all over downtown San Diego.

Of course, Marvel TV shows are very well pumping iron this year. There is the Dan Stevens-led Legion, which closes out SDCC with a Hall H panel on July 22; Fox’s The Gifted, wrapped around the side of a downtown hotel as well as the MTS trolleys traveling in front of the convention center; and Freeform’s Marvel’s Cloak and Dagger which has a panel and a big presence at The Experience over near San Diego’s Petco Park with a noteworthy bungee cord treat. As far as we can tell, the big Marvel swing this year looks to go to Iron Fist. Back for a second season later this year, the Netflix series has taken over a prime piece of Gaslamp real estate with its logo right in the eye line of attendees.

Once again, AMC’s The Walking Dead graces the official Comic-Con laminates, and brands the security scanners everyone must pass to get in and out of the July 19-22 conference.

The zombie apocalypse series based on Robert Kirkman’s comic has also reclaimed a zone across from the convention center for its 2018 activation. Melding characters and other elements from TWD and Fear the Walking Dead, the “Dead Quarters” has the tricked-out S.W.A.T. truck driven by Maggie Grace’s Althea in the latest season of the spinoff. With banners depicting the departing Andrew Lincoln’s Rick Grimes, Norman Reedus’ Daryl Dixon, Danai Gurira’s Michonne, Alycia Debnam-Carey’s Alicia Clark and Colman Domingo’s Victor Strand, the TWD mini-theme park has a portion of the Sanctuary from the show, various props and a well-worn slide that will propel fans into the jaws of the walkers.

Stepping back partially from her full-time Maggie role on TWD, Lauren Cohan will likely be absent for the show’s July 20 Hall H panel. But she is pulling double duty outside — on the side of Petco Park, the confab veteran overlooks the convention center via a huge poster for her new ABC series Whiskey Cavalier with Scott Foley. The stadium has long been a SDCC billboard of sorts for ABC shows, and this year also sees the Nathan Fillion-starring The Rookie getting big play. There isn’t a panel for the new LAPD drama, but Fillion will join the Dr. Horrible’s Sing-Along Blog reunion in Hall H on Friday along with Joss Whedon, Jed Whedon and Felicia Day.

Perhaps in some ways, panels have become passe at Comic-Con. So if activations have become the new arena in jockeying for position, Amazon may have established the blast radius to beat.

In its quest to pivot to broad audience programming, the Jeff Bezos-founded company and its streaming service has taken a giant leap forward this year. Inside the convention center, Amazon Studios is putting on a mega-panel Friday with Tom Clancy’s Jack Ryan EP and showrunner Carlton Cuse; Good Omens showrunner Neil Gaiman; The Tick creator Ben Edlund; Mr. Robot’s Sam Esmail, who is directing the upcoming Homecoming; Lore and TWD EP Gale Anne Hurd; and The Expanse showrunner Naren Shankar. Outside the venue, Amazon is going gigantic — and not just with the poster for the John Krasinski-starring Jack Ryan on the side of downtown’s Omni hotel. In what looks to be the biggest activation to date here, a multi-level and multi-platformed Jack Ryan experience opens Thursday at the corner of 1st and Martin Luther King Promenade, with the aim to put fans inside a number of training exercises and missions the CIA officer is challenged with – including a very high-tech escape room.

Along with the return to the side of the Marriott Marquis for Conan O’Brien, who is hosting his TBS late-night show from San Diego this week, those highlights are just a few of the sights Comic-Con attendees will see on their way to the confab.

Additionally, right at the well-traveled entrance to the Gaslamp Quarter, NBC’s The Good Place is re-creating some of the series’ most noticeable occasions. USA Network’s The Purge, its limited series based on the Blumhouse hit horror franchise, is popping up on bus shelters around the city and has adopted a playfully menacing edge with its self-described “one-stop shop for the perfect purge night.” Comedy Central and South Park are back with the “Cartman’s Escape Room” exhibit outside the convention center. In addition to a VR experience for fans, Audience Network’s Mr. Mercedes is advertising its upcoming second season on the side of the Omni.

Another Stephen King-based project is hoping to make a big impression here. Debuting on Hulu on July 25, Castle Rock has a panel on July 20, a bed & breakfast activation and scavenger hunt. As banners inside the convention center proclaim, the J.J. Abrams-produced series based stories will also be having its world premiere Friday unveiling the first episode of the horror drama starring Andre Holland, Sissy Spacek, Bill Skarsgard and Melanie Lynskey.

See you at the other end Sunday.