Continue to Deadline SKIP AD
You will be redirected back to your article in seconds
Skip to main content
March 4, 2018 5:32pm
46 View All 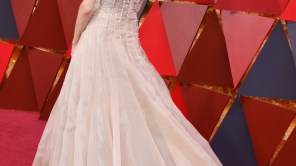 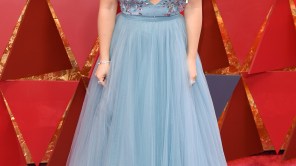 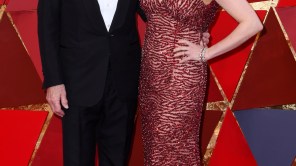 The Oscars red carpet is usually a place where actors and actresses don glamorous gowns from the world’s most renowned designers. Now, with the current social climate, the fashion has taken a back seat and instead of asking “Who are you wearing?” journalists should be asking “What are you standing for?” as causes have become a mainstay on the red carpet.

The red carpet campaign for change came in the wake of the sexual misconduct allegations against Harvey Weinstein. The #MeToo movement, originally started by Tarana Burke, came into the forefront and the Time’s Up movement came in strong at the Golden Globes, with men and women wearing a signature pin. This carried over to tonight with many wearing the pin. Elisabeth Moss wore one on her belt, but mostly men donned the pin including Bradley Whitford, Justin Paul, Benjamin Bratt, and awards season fave, Shape of Water director Guillermo del Toro.

Time’s Up reversed the “wear all black” campaign they did at the Golden Globes and traded that in for a prism of color as they tweeted this morning, “Tonight, our sisters will be wearing a festive array of colors and TimesUp pins, representing this vast movement of women everywhere.”

Tonight, our sisters will be wearing a festive array of colors and TimesUp pins, representing this vast movement of women everywhere.
CONGRATS & GOOD LUCK to all the nominees tonight! #TimesUp #Oscars #Sisterhood
(We ❤️ this #GoldenGlobes art #RachelJo) pic.twitter.com/tqsT4vhMnT

Many actresses donned bright colors including Viola Davis in a bright pink gown, Salma Hayek Pinault in a shimmery lavender number as well as Jennifer Garner in a striking cobalt blue.

Amidst the Time’s Up pins, ACLU and classic red AIDS ribbons, a new pin came on to the scene: a Wear Orange to Prevent Gun Violence pin, which is in support of the advocacy group Everytown for Gun Safety. The introduction of the pin comes shortly after the tragic shooting at Parkland. Hamilton creator Lin-Manuel Miranda was spotted wearing the orange pin on his lapel.

Other cause-driven accessories that were seen on the carpet was the “I Stand With Immigrants” pin as seen on La La Land producer Jordan Horowitz and Best Screenplay nominee Kumail Nanjiani.

Rachel Morrison, the first woman nominated for Best Cinematography and Black Panther DP, addressed the cause-driven pins and the movement saying, “It’s not only good for Hollywood, but it’s good for society.” She added, “There’s so many bigger issues than movies and entertainment. If we get to use our voices to say something bigger, than why not?”

Click on the photo above to launch this year’s red-carpet photo gallery.