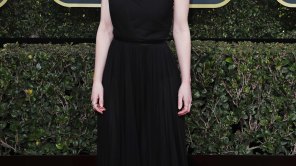 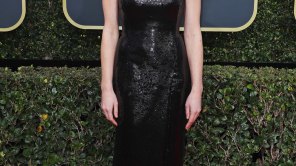 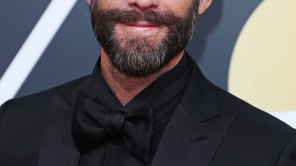 UPDATED: Black is the new black. The Golden Globes red carpet was taken over by a sartorial flood of black designer wear as actresses raised awareness against sexual harassment and supported the #MeToo movement on one of the biggest stages of the year.

Among those wearing black ahead of tonight’s live NBC telecast are Debra Messing, Claire Foy, Catherine Zeta-Jones, Kelly Clarkson, Alison Brie, Jamie Chung and Tracee Ellis Ross so far as arrivals continue at the Beverly Hilton. (Click on the photo above to launch our photo gallery.)

“The most important thing I think about using this event is the fact that everyone is coming together at 0nce,” said Brie, who is nominated in the Lead Actress Musical-Comedy category for Neftlix’s GLOW. “It’s exciting — we have a platform here, and it’s important to use that platform for good.”

Golden Globes Ratchets Up Its Tightest Security Ever For 75th Ceremony

Nominated for her role in I, Tonya, Allison Janney says that the movement of wearing all black is a message that “we are all a united front.” She adds, “We are taking action against things that have surfaced in our industry — and God knows they have been going on in all industries: the abuse of power and sexual harassment. I’m not sure it will ever go away, but we are making sure that people are able to take action against it.”

Lena Waithe, star, and writer on the Golden Globe-nominated Master of None adds to Janney’s sentiment, “It’s just not about sexual harassment. That’s where it began.” She goes on to talk about the organization Times Up saying, “they not only want to stop sexual harassment but racism, homophobia, transphobia — all those things. This is about making everyone being treated equally and having a happy and safe work environment — whether you work in Hollywood or are a farmer or a nurse. All of us wearing black is a small token of our solidarity.”

Referring to women (and many men) wearing all-black shouldn’t be seen as a protest — it’s more than that according to Susan Sarandon.

“It’s is not a protest — it’s an action,” says Sarandon, nominated for her role in Feud. “It’s being followed through with a defense fund and networking with others in different countries.”

Rosa Clemente, one of many activists accompanying actresses on the red carpet says, “The reason why we differentiate is because that’s what organizers do — we’re in the streets, we’re shutting things down — and action is good, but what do we do the next day? We’re talking about systemic change in all industries.”

The #MeToo movement initially was launched by Burke, who started metoo.support nearly 12 years ago, a website that supported and amplified the voices of survivors of sexual abuse, assault and exploitation. Alyssa Milano tweeted “#MeToo” in the wake of the sexual harassment allegations flooding Hollywood to echo Burke’s message. It since has become a rallying phrase of empowerment for women to fight against sexual misconduct.

Many black gowns and outfits on the red carpet were adorned the words “Time’s Up,” the logo of the aforementioned newly launched organization started by a group of 300 women in the entertainment industry that is designed to address what’s described as “the systemic power imbalances that have kept underrepresented groups from reaching their full potential.” The organization has started a legal defense fund for sexual harassment claims. In the days leading up to the Globes, actresses have been vocal about Time’s Up on social media, encouraging audiences outside of the ceremony to wear all black and posting their pics on Instagram, Facebook, and Twitter.

The pin was designed by Oscar-nominated costume designer Arianne Phillip, who also helped design the logo. She has worked on the Kingsman franchise as well as Tom Ford’s Nocturnal Animals and A Single Man.