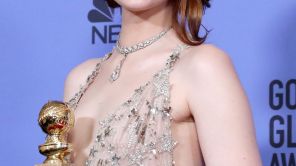 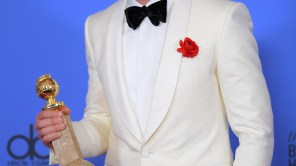 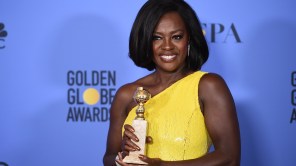 Click on the photo above to launch a winners’ photo gallery.

“It’s all about the process of making this film,” explained writer/director Barry Jenkins. “Going back to day 1 on set wasn’t about making a universal film, it was about getting it right. In doing that, I think the movie touches people because they see the authenticity that we put into it. We weren’t trying to do anything but tell our story and people respect that.. I’m just telling a story about my place right here, right now. I think we need more of that as we move into the next four years of life on the planet.”

Jenkins later added, “people see the film, not as escapism but as realism. No one could anticipate that we’d be sitting on the president elect that we have coming into office. “However,” he continued, “we all made these films because we thought something was lacking in the soil at the root of these stories that havent been told. I don’t know that it was these two things were coming together at the some time but we’re here now and we have to keep telling these stories truthfully and honestly. We have to give people things not only to escape to but to run to and reaffirm that if you feel something you speak it.”

Reflecting after his win in a state of shock—on the fact that he was potentially the youngest director ever to win the Golden Globe for Best Director—La La Land’s Damien Chazelle remained humble, recalling the six years of no’s that came before the film was green lit. “That feels incredible. I’m not sure. I think I’m still processing this,” he said. “It’s my first time ever at the Golden Globes. I assume it doesn’t always go this way. I’m not going to get used to it.”

Speaking to his dream of a production process, Chazelle addressed the importance of balancing the nostalgic and the contemporary, without getting all too sentimental about it, while stars Ryan Gosling and Emma Stone spoke again to the power in the film’s affirmation of those who dream. “The thing that moved me so much about the film is this idea of the importance of pursuing your dream despite the obstacles. It seems like a very appropriate time for that,” Gosling said, echoing and acknowledging Stone’s acceptance speech.

“I also think there’s something about these two characters and what they’re going through that feels very realistic and human, even in these fantastical circumstances,” Stone added.

While embracing the film’s great success this evening, the cast and crew dodged certain questions—they weren’t inclined to look at the film’s place as a fantasy in the modern era, say, or to speak to anything at all political. “I don’t know what you all will be doing on January 20th—I’ll be on set,” producer Marc Platt said. Still chasing that dream.

Isabelle Huppert won the best drama actress award tonight for her ambitious turn in Paul Verhoeven’s Elle in which she plays a woman who is raped by her next door neighbor. The movie is subversive, and though embraced by critics with an 87% Rotten Tomatoes rating leaves audiences in deep discussions.

“Exploring the human psyche that’s what makes cinema worthwhile being done,” said Huppert about the bold movie, “The most scary things are the most rewarding.”

“Being adventurous in subject matters rather than being scared of exploring, even if it’s disturbing” said Huppert who won her first Golden Globe tonight.

When queried about bringing the stage play Fences to the big screen, supporting actress winner Viola Davis described it as a “natural fluid movement.” She went on, “It already is an intimate story but not intimate in a way that is small. With any great writer who writes tragedy, we know that they write about big emotions, people within the confines of a family or community fighting for their lives. It was a joy and pleasure to have that challenge and to have August Wilson’s words and characters.”

Following his best actor in a TV series drama win for Goliath, Billy Bob Thornton stuck up for “the fools who dream,” to paraphrase from Damien Chazelle’s Best Drama nominee La La Land. Clarifying comments made in a brief appearance on stage, Thornton said, “A lot of people in the entertainment business get called ‘privileged,’ and yet I came out here in poverty and spent a decade trying to eat. Those kinds of things get to you. At the end of the day, what separates people, they’re people who are willing to take a chance.”

Speaking together after their respective wins for Best Original Score and Best Original Song, La La Land’s Justin Hurwitz, Benj Pasek and Justin Paul spoke about the iterations the film’s music went through and major changes that were made along the way. “The song ‘A Lovely Night’ went through a lot of different revisions, Pasek said. “I know Justin has said he has ‘Revision 106C.’” “There was a song called La La Land, it was a title song. Ultimately, I think its best not being in the movie,” Hurwitz added. “We didn’t want to have one extra song that didn’t belong.”

Best animated feature Zootopia co-director Rich Moore talked backstage about the inspirations for the film.  “Being able to take something from our childhood, those classic Disney films and make it about something. It’s about bias, discrimination and racism and the damage it does to our society; the damage of leading by fear. To put that in a form that wasn’t polemic, but a piece of entertainment first, but had a strong core to it, and have an audience — both children and adults –think about it; that’s the thing that got me charged up about this film.”

Collecting his third Golden Globe tonight for his supporting turn in the AMC limited series The Night Manager, Hugh Laurie revealed he tried to option the John le Carre novel 25 years ago. “I have no producing skills, but I tried to option the book because (this story) had to be on the screen. I originally thought I’d play the Tom Hiddleston part, but then my hair fell out and a number of things. But the romance, the nobility of the story was so overwhelming.”

Speaking on how The Night Manager resonates, Tom Hiddleston said, “author John Le Carre is a curious student of British identity. Through Jonathan Pine, he’s trying to get underneath being English…LeCarre’s anger with Roper is that he’s the inheritor of British democracy and he’s done the worst things imaginable. What drew Hiddleston to the role of spy Jonathan Pine, the actor said, “Spies have to conceal and be believable as they lie. The nature of acting is exploring identity. Pine is four different people and we have to believe in all his guises. It’s all like theater. If you’re doing it well (spying), they don’t see the work.”

Astonished by the Hollywood Foreign Press Association’s embrace of best foreign language winner Elle, director Paul Verhoeven addressed his thoughts on the film, and on the sometimes negative responses it provoked. “I think people who don’t like it are angry not because the movie’s about rape, but it’s that the movie is not, let’s say, making the rape the center of the movie. The center of the movie is Isabelle Huppert, the character of Michèle Leblanc,” he said. “Next to this violence and cruelty that is displayed in the rape, there is also her relationship to people, and these are weird and funny.”