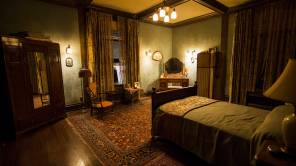 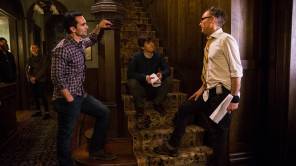 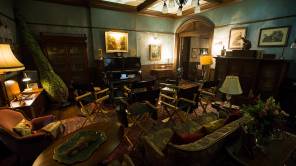 Forty minutes out from Downtown Vancouver, on an otherwise ordinary road, there’s an old motel that may look quite familiar, if only you know where to look. This is the Bates Motel, a gorgeous re-creation of the original set from Alfred Hitchcock’s Psycho, the cinema classic that ran shivers down the spines of people across the nation in 1960. It was built for the A&E series Bates Motel, starring Freddie Highmore and Vera Farmiga as Norman and Norma Bates, one of the most dysfunctional mother-son pairings there ever was.

At the location of the show’s exterior sets in Aldergrove, a man appropriately titled “the innkeeper” watches over the hotel as part of a 24/7 security effort. Walking through the hollowed-out husk of the Bates house one cloudy day in March, he points out a few interesting items to be found around the set, including a cardboard cutout of Hitchcock, who stands peering out the second floor window.

With the help of production designer Mark Freeborn,showrunners Carlton Cuse and Kerry Ehrin created their set from original plans for Psycho—the motel and the creaky haunted house on the hill. The pair agreed to depart from the original film by setting their contemporary update in fictional White Pine Bay, Oregon, in order to capture “the misty, woodsy quality of the northwest” that is so suited to Norman’s gloomy world. Before the sets were built, “I think [the location] was an old sanitation dump,” Ehrin laughs. “And it just kind of grew out of the ground.”

From their initial meeting, the collaboration between co-creators Cuse and Ehrin felt, to Cuse, like the perfect combination—“like chocolate and peanut butter.” Though both showrunners are based in L.A., Cuse contributes mostly through notes on story pitches, outlines and scripts, crediting Ehrin with “putting pen to paper in the most beautiful way” and handling the day-to-day challenges of production. Concurrent with Bates, Cuse runs the set of another NBC series, Colony, in Los Angeles, yet he humbly underplays the challenges involved. “I think a lot of successful people are busy people, and I look around the landscape and I’m doing about half as many episodes a season as Shonda Rhimes,” Cuse says.

Today at the Vancouver Film Studios, a climactic dinner scene is being shot involving Norman, Norma, and Sheriff Romero (Nestor Carbonell), Norma’s most recent love interest who finds himself the target of Norman’s aggression. Dinner scenes are tricky, requiring an enormous amount of coverage, and script supervisor Corey Jones makes it clear that continuity in scenes involving food is a particular challenge. “It’s the worst, actually.” This is a fairly standard day of production on Bates with the exception of one fact: Highmore wrote the screenplay for this episode, episode 8 of Season 4, which aired May 2.

Describing the evolution of a character he has played over the course of four seasons and as many years, Highmore notes, “Norman is very insightful in this fourth season. Perhaps better than anyone, he has this weird ability to see through the nuances that define every single character.” The same can certainly be said of the actor, who Ehrin credits with bringing his significant understanding of character into the writers’ room.

Highmore’s co-star, Vera Farmiga, was very impressed with the way he functioned as an actor’s writer, incorporating moments of humor and generally sculpting scenes in a way that was rewarding to play. Admittedly, she was nervous for Highmore—though she has directed in the past, Farmiga acknowledges that even she would be terrified to enter into the domain of the writer. “To actually take on the entire psychology, character by character… for a 24-year-old man to jump into the skin and the psyche of a 42-year-old woman, and the position she’s been in, takes a heck of a lot of balls and imagination and risk and empathy. It blows me away that he could do that,” she admits. “I’m not going to say that I wasn’t surprised. I was actually sweating it for him. He’s a kid. He’s a baby. And he did an outstanding job.”

Like Farmiga, the Bates showrunners remain ever surprised by Highmore, having never experienced an actor offering to write for the show. “I also never had an experience where the lead actor of a television series spent the summer between seasons of the show working at a law firm in Madrid, translating documents from Spanish to English,” Cuse quips. Highmore is clearly a special case; an actor that Cuse places in the great tradition of multi-threat performers including Warren Beatty and, more recently, Ben Affleck. “Freddie’s a renaissance man, and I like to joke with him that I think he’s secretly in MI6, because he speaks fluent Spanish and fluent Arabic, and went to Cambridge. He probably really is a spy, but he’s so savvy that there’s no way to actually confirm that.”

Highmore fears that referencing his study of language and literature “sounds really wanky,” but his desire to write wasn’t based purely in academia. “I think it was born naturally out of working on a television show, because there was something odd to me about leaving the show behind in between seasons, after putting so much into it on set for four, five months.”

Walking through the interior sets at Vancouver Film Studios—through the lamp-lit wooden halls, and into Norman’s bedroom, full of Norman’s childhood artifacts—Highmore’s affection for this set and the series are clear. Here, he says, “Everything seems to have a real weight of actual history,” and it only makes sense that as Norman’s character evolves in his understanding of the world, Highmore evolves along with him.

Though Bates isn’t Highmore’s first entrée into writing—he’s also sold a pilot to Sky, a British broadcaster, and has written yet another pilot with Ehrin. “I think a lot people who start writing literally have a fear of the process because it’s fear of the unknown,” Ehrin says. “So when you are shepherding someone who’s starting, a lot of what you’re doing is just dispelling fear.” Highmore was brought into the writers’ room “later on in the game, once the overall season arc had been broken” on cards, at which point he was involved with pitching nuanced beats for his episode. Highmore stresses that the writers’ room on Bates, like the set overall, was a non-competitive environment— “a true sort of collaboration.”

Even with the support of a welcoming cast and crew around him, executing this episode was no easy feat. Though the series is a contemporary prequel, which trades in the ‘60s era for a world of texting and DNA evidence, the heavy, difficult issues, including domestic and sexual abuse, trauma, and violence against women, remain the same. The show’s leads, Norma and Norman, have lives that leave room for one another and no one else, which is why Ehrin feels that Bates is the most challenging series she has ever had to write for. “It’s about a dysfunctional family, and the dance of a dysfunctional family is, they never change. They want to, but it never sticks.”

Moving forward into the final season of Bates Motel, Cuse and Ehrin are leaving a little to the imagination. “We have guideposts and we know the destination. How exactly we’re going to get there… that’s kind of the fun of writing it, and that’s what we’ll be doing when we get back in the writer’s room,” Ehrin says. What Ehrin can confirm is that several central characters, including Norma’s brother Caleb, will return to the fold, as Norma struggles to find happiness and peace in her life.

For Cuse, the question going forward is, “Do these two characters have any chance of escaping what we presume is their inevitable fate?” For Highmore, who is returning to the writers’  room for Season 5, the answer is yes. “I don’t think the writers necessarily see the show ending with Marion Crane pulling up to the house and it being like, ‘Norman’s arrived,’ you know? There’s certainly this openness as we get towards next season of moving past events in Psycho, or there’s that fluidity with the storytelling.”

For Highmore, Cuse and company, this is where the excitement is—what makes Bates Motel such an innovative and unique piece of storytelling. Says Cuse, “I think history will be very kind to Bates Motel.”

Click through to an exclusive gallery from our day on the Bates Motel set, at top.