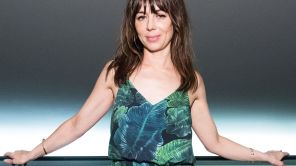 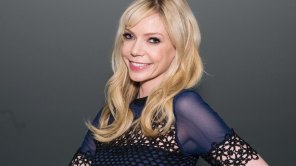 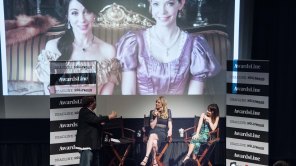 When it comes to filling out the guest star roster for the second season of Comedy Central’s turn-of-the century satire Another Period, creators and stars Natasha Leggero and Riki Lindome have an embarrassment of riches given their footprint in the Hollywood live comedy scene.

Last night, following the Awardsline Emmy screening for the pilot of Another Period, the duo, who respectively play fame-obsessed Newport, R.I. Bellacourt sisters Lillian and Beatrice, dished on ‘who’ would actually play ‘who’ in season 2, which kicked off on June 15. Deadline’s Anthony D’Alessandro moderated the Q&A.

'Another Period' Renewed For Third Season By Comedy Central

Lindhome, who starred in Whedon’s 2012 feature adaptation of William Shakespeare’s Much Ado About Nothing, says it’s a big acting turn for the Buffy the Vampire creator. “In other cameos he’s made, he’ll usually yell ‘Cut’,” said Lindhome; however, as Duane Reade, Whedon “refuses to sell Lillian a condom, because she’s a women, therefore a slut; and they’re illegal, which was real (during that time).”

In addition Cedric the Entertainer’s Joplin is “like a Kanye version of Scott Joplin, where he talks, like, in the first and the third person, and flips back and forth, and we’re just always confused,” Lindhome added. “And he has this girlfriend who wears a burka, but also has a push-up bra. I think we’ll get some tweets about that.”

Also coming up this season on Another Period are the Roosevelt clan, with Mike O’Connell as Teddy, June Diane Raphael as Eleanor, and Twilight alum Michael Welch as FDR, himself. And as Leggero and Lindhome continue to take a delightful slant on America’s Gilded Age, the show’s creators delighted in painting a slightly different portrait of the handicapped president. The characterization was “based on this documentary we saw, where FDR was in college, and nobody liked him,” Lindhome says. “Everyone said he was a mama’s boy, he got into his fraternity because he was a legacy, no one would date him; hence him marrying his cousin, Eleanor. We had a lot to go on.”

“We basically wrote him as Justin Bieber,” Leggero adds, “He makes fun of cripples.”

In addition, season 2 will feature appearances from an eclectic mix, including gossip blogger Perez Hilton, Flight of the Conchords star Jemaine Clement, Andrew Rannells, and Matt Gourley, and as the series progresses, the creators have found that the more historical research they throw themselves into, the easier it is break zany plotlines.

While Lindhome and Leggero have known each from their stage time around Los Angeles from the Upright Citizens Brigade stage to alternative comedy rooms, the two bonded on a trip to Africa where they were enlisted to make comedy videos about malaria, in concert with philanthropic organization Malaria No More.

But the trip didn’t go as expected.

“We were supposed to go with Nick Kroll and Paul Scheer and Ed Helms—it was the five of us. And then their plane got diverted somehow to Paris,” Lindhome remembered. “And they were in Paris, and we were four days in Senegal, just alone. It was like 120 degrees, and these people were just following us, being like, ‘Be funny,’ in the weirdest places, where there’s nothing funny about where we’re standing.”

Taking a “tiny, scary plane back” en route to the states, Leggero posed a question to Lindhome. “Natasha was like, ‘So you have like 90 credits on IMDb. How many things have you been in that are actually funny?’ Lindhome shares. “And I was like, ‘three?’ And she’s like, ‘Not good enough.’ And so we started talking about making our own stuff, and it just went from there.”

Leggero had two ideas to pitch—a faux reality show aptly entitled Dumb, and an idea centering on the lives of the rich and (aspirationally) famous in turn-of-the-century America—and on Lindhome’s suggestion, the two concepts merged.

“We started reading up about Newport, Rhode Island, and we went there—I had read that all of the wealth in America, in 1902, was in Newport. So we went to this town, and you can still go through all the houses, and you can just learn about the families. It was basically America’s Gilded Age,” Leggero says. “But it’s all new money,” Lindhome notes. “People went from being a fur trapper to owning all the oil. So it wasn’t like the classy version of Downton Abbey—it was the American version, where they just became billionaires out of nowhere.” Another Period takes place at a time that’s a decade before income tax became legal, when America was essentially a two-class society of haves and have nots.

Sensing the boundless comedic potential in this bizarre, transitional period in America’s history, the creative duo pressed forward confidently to pitch the series—while admittedly working rigorously to prove themselves as new female showrunners in Hollywood.

“We really went the extra mile when we were selling the show. We might have overkilled, but we went and made our own pilot presentation that we financed, we wrote the script, and then we wrote a 40-page bible showing where every character would go,” said Lindhome. Given its track record for cultivating female comediennes and show runners, from Amy Schumer to the Broad City stars and creators, Comedy Central turned out to be the right spot.

In fact, Leggero and Lindhome have a very clear idea of how the series can move forward through season 5; and despite the staggering list of talent added to the roster this season, the pair are intent on eventually securing one individual, in particular.

“Danny McBride,” beamed Lindhome. “Both seasons, we wrote him a role, and both seasons, he was booked. But he’s so perfect to be on our show! We want him so bad.”

Click through to an exclusive gallery from last night’s Another Period panel, at top.