Late-Night Shows Win Back Their Fifth Emmy Nom Slot After Showrunner Campaign
Read the full story
May 16, 2016 10:20am
19 View All 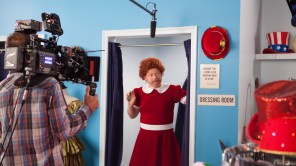 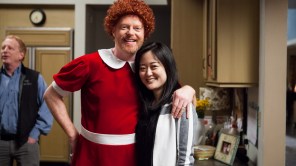 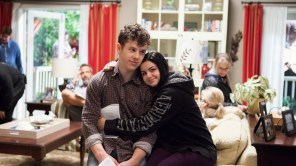 On one of the last shooting days of its seventh season, Modern Family’s shot list spills over onto a second page of the call sheet. Things move quickly and efficiently on the Fox lot’s Stage 5, as co-creator Christopher Lloyd and director James R. Bagdonas preside over filming for the season finale. As Mitch, Jesse Tyler Ferguson struggles to escape a Little Orphan Annie costume. The Dunphy clan makes plans in the living room, as Andy (Adam DeVine) and Haley (Sarah Hyland) say an emotional goodbye. Rico Rodriguez, Ed O’Neill and Sofia Vergara struggle to keep straight faces as they film a scene in which Manny tries (and fails) to teach Jay how to double-click on his tablet. All this before lunch, and Lloyd still has time to teach a visiting writer how to use the coffeemaker at Craft Services.

“We’ve even got a bit slower since the first three seasons,” says Eric Stonestreet, who plays Cam. “But it’s testament to the blueprint of the show: we don’t even think about turning around on scenes like traditional shows. We’re always raking and panning and we don’t need to do insert shots and things like that.”

Indeed, there’s something balletic about the dance these actors do with their crew as they run multiple-page dialogue scenes in single takes, refining and refining with each do-over so the camera moves quicker and the comedy gets sharper. Stonestreet remembers cracking up when Rodriguez and O’Neill practiced the double-click scene at the table read, and it’s funny still when they go for their first rehearsal on set. But by the time they’re ready to move onto the next shot, it has morphed into the kind of precise, witty comedy that landed Modern Family five consecutive Emmy wins for Outstanding Comedy in its first five seasons.

The show narrowly missed out on making history last year when Veep took the Emmy crown (it’s tied on five wins with Frasier, another Lloyd-produced show), but co-creator Steve Levitan is proud of the resolve with which his writing staff charged into Season 7. “The legacy of the show is something we take extremely seriously,” he says. “And this was a very ambitious season. Especially as you get into the later years of a series, just feeling like you’re not starting to be terrible is a victory. We’re really trying hard not to let this series finish weak, and we did a lot of big shows, and a few shows that were very different for us, this year.”

“In theory, it gets harder every year because there are fewer stories for us to tell,” notes Lloyd. “But we still stumble into stories where we go, ‘Wow, we could have told this in the first or second season.’ It was out there, and we just didn’t think of it until now. The greatest pressure we feel is not to betray what we started out doing, which is delivering a funny, quality show that reflects real lives and real family emotions.”

Over the course of this day on set, each of the principal actors and many of the show’s longstanding behind-the-scenes talents will give different viewpoints on why they feel Modern Family continues to work. For some, it’s about the way the family members have changed and evolved as the show has gone on. That’s certainly true of the younger kids in the family, who are now young adults. “We got lucky with the kids,” says Julie Bowen. “You never know what kind of actor they might grow into, but we’ve been so fortunate to be able to write to their strengths. They’re by no means just supporting cast.” When baby Lily (Aubrey Anderson-Emmons) started to speak in the third season, she became Mitch and Cam’s sarcastic voice of reason. And the show was already a hit before Jeremy Maguire was even born. Today, the four-year-old who plays Jay and Gloria’s young son Joe has his first big speech to deliver, and he has it down to a tee. “Jeremy’s so great,” smiles Sofía Vergara. “He’s such a sweet kid and very professional.”

These new dynamics give the adult cast fresh material to react to. But, says Ty Burrell, it’s equally important that they stay true to those original characterizations. “It’s still a sitcom and there has to be a little bit of a reset button so that people can tune into any episode and know the characters in that situation. But having the show be on for seven seasons has allowed us to learn so much about them. Nobody’s grown out of their own thing, so you can still expect the same flaws, but it’s very cool to find, at different stops on the way, that Phil can be a really tough taskmaster, or Claire has the ability to be looser.”

Really, Modern Family has always dealt deftly with two extremes like this, so it’s no surprise that even the people who make the show contrast when asked to explain what exactly made it a hit. On the one hand it’s a broad, network family sitcom; a reliable old friend for viewers around the world. On the other, it deals with issues like mixed-race marriage and gay adoptive parenting. Not so uncommon for the networks today, perhaps, but there’s an argument to be made that this show helped pave that road.

Similarly, its comedy can be arch and its drama subtle, sometimes in the space of a single scene. On the Dunphy house set, Alex (Ariel Winter) is rolling her eyes at her family for forgetting she’s returned from college for the summer, and then Haley and Andy contemplate calling time on a relationship that seemed to be doing favors for the both of them. Lloyd says avoiding over-sentimentality has been the key to making these moments work. “Probably the biggest mistake you can make in comedy is to reach for emotion that you haven’t earned.”

Of course, not having to shoot in front of a live audience gives the show an excuse to work on location more than its format might traditionally allow; something that has added to its authentic feel. The three houses that play these families’ homes have become popular tourist spots around L.A. Two of them are only a stone’s throw from the Fox lot (Jay and Gloria’s modernist palace is further away, in Brentwood). And the day before our visit, Jesse Tyler Ferguson had been out on Hollywood Blvd., shooting the other half of the Annie scene. “I really took advantage of the surroundings. I found Donald Trump’s star and took a photo next to it, with me in my Annie dress. People thought it was an endorsement; I just liked the juxtaposition. Dreams can happen anywhere, I guess.”

Stage 5, meanwhile, has been home to three of America’s most familiar house interiors since the show started in 2009. A plaque on the wall outside notes that the stage previously hosted shows like The X-Files and Lost in Space. These comfortable sets—Mitch & Cam’s hip apartment, Jay and Gloria’s leopard-print-and-leather show-home, Claire and Phil’s Pottery Barn homestead—were modelled on the real houses they used to shoot the pilot. They were lit by James R. Bagdonas, who has also directed multiple episodes, including this season finale. “These sets are pretty much practical,” he notes. “There are four walls and ceilings, because the documentary feel meant we wanted realistic sets to shoot in. The challenge of that, as a cinematographer and a director, has been we sometimes shoot four pages with maybe ten actors and they’re moving constantly, so it really does need choreographing.”

After seven seasons, it’s remarkable how quickly those problems can be solved. The cameras become characters in their own right, and the actors know how to block themselves and find marks without having to be told. But if this show is on autopilot, the atmosphere of fun, familiarity and creativity doesn’t let on. “I have the best job,” says Vergara, echoing her fellow cast members. “I get to hang out with family every single day and call it work.”

Still, its creators know they’re in the home stretch, though an eighth season has been ordered. An end is in sight, but when will it come? “I think my personal goal at this point would be 10 seasons,” says Levitan. “I don’t know if it’s attainable or not; I think we’ll have to look at it every year, and if we feel like we’re just running out of things to say then it will be time to make that tough call.”

“When we sat down in May last year, we had nothing,” Lloyd reflects of this current season. “But we still delivered 22 stories—which took these characters to new places—without too much of a struggle. It tells me there’s a lot of life left.”

Ed O’Neill, who knows a thing or two about network comedy after 262 episodes of Married with Children in the 80s and 90s, would like to get to 200 at least. This finale takes Modern Family to 166, and he didn’t expect to be here. When he first heard about Modern Family—then dubbed ‘My American Family’—he had taken a courtesy meeting with Lloyd and Levitan because he liked their work. “It’s one of those things that are so inexplicable in Hollywood. I met with them just to tell them, ‘Look, I really don’t want to do another half-hour.’” The script arrived a year later, under its current title. “I didn’t like the title,” he laughs. “But I read it and I thought, ‘This is good.’ And then I read it again and thought, ‘This is going to be a big hit.’”

Nearly seven years later, he’s in no particular rush to bring Modern Family to a close. But he relates a thought he’d shared with Burrell earlier in the day. “I told him that the way to go out is when you start thinking, ‘We should probably wrap this up…’ That’s much better than, ‘Oh dear God I want to go on for another year; you don’t get it!’”